Athletes Unite! It’s Time to Stand Up for the Prerace Pasta Dinner 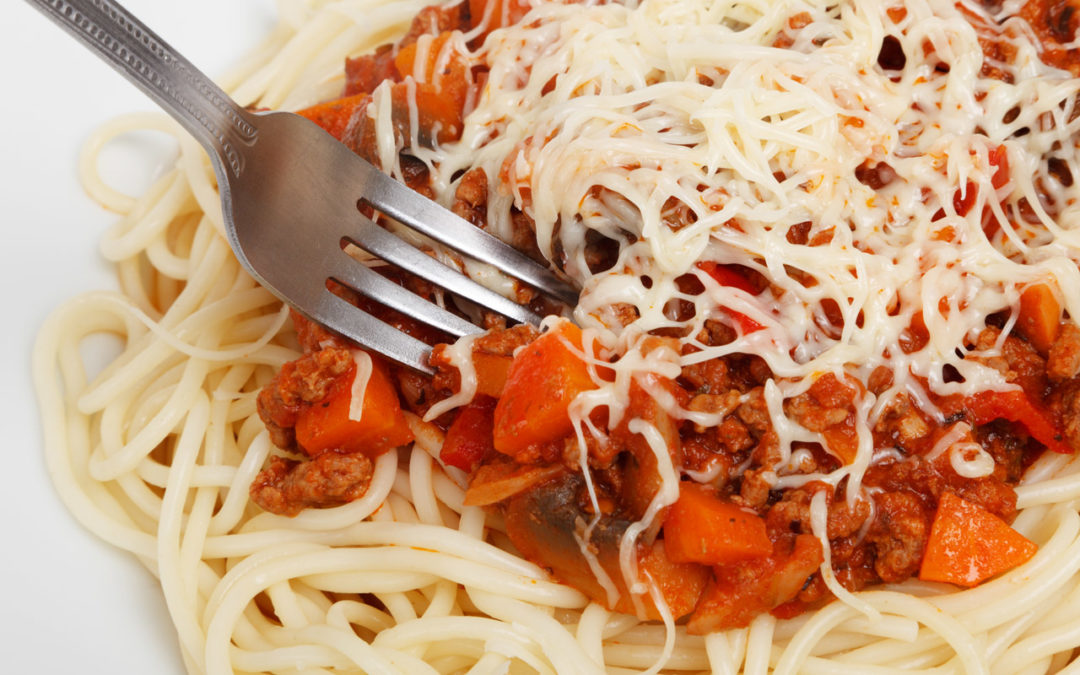 You can pry our penne marinara from our cold, dead hands.

Like the breadsticks at Olive Garden, the opinions on pasta never end.

Spend enough time digging and you’ll come across all manner of pasta takedowns: Pasta can destroy your race; pasta will kill your metabolism; white pasta is stripped of nutrients; pasta should really just be a vehicle for better performance foods.

All the conflicting assertions are enough to make your head spin faster than spaghetti around a fork, but according to nutritionists, the truth is simple: Pasta’s bad reputation is a bigger smear job than marinara on a tablecloth.

“Pasta in moderation isn’t bad for anyone,” says Kelly Hogan, a registered dietician and nutritionist in New York City and Boston qualifier. “Runners, specifically, don’t need to shy away from foods with carbohydrates. They really do fuel our training and racing.” 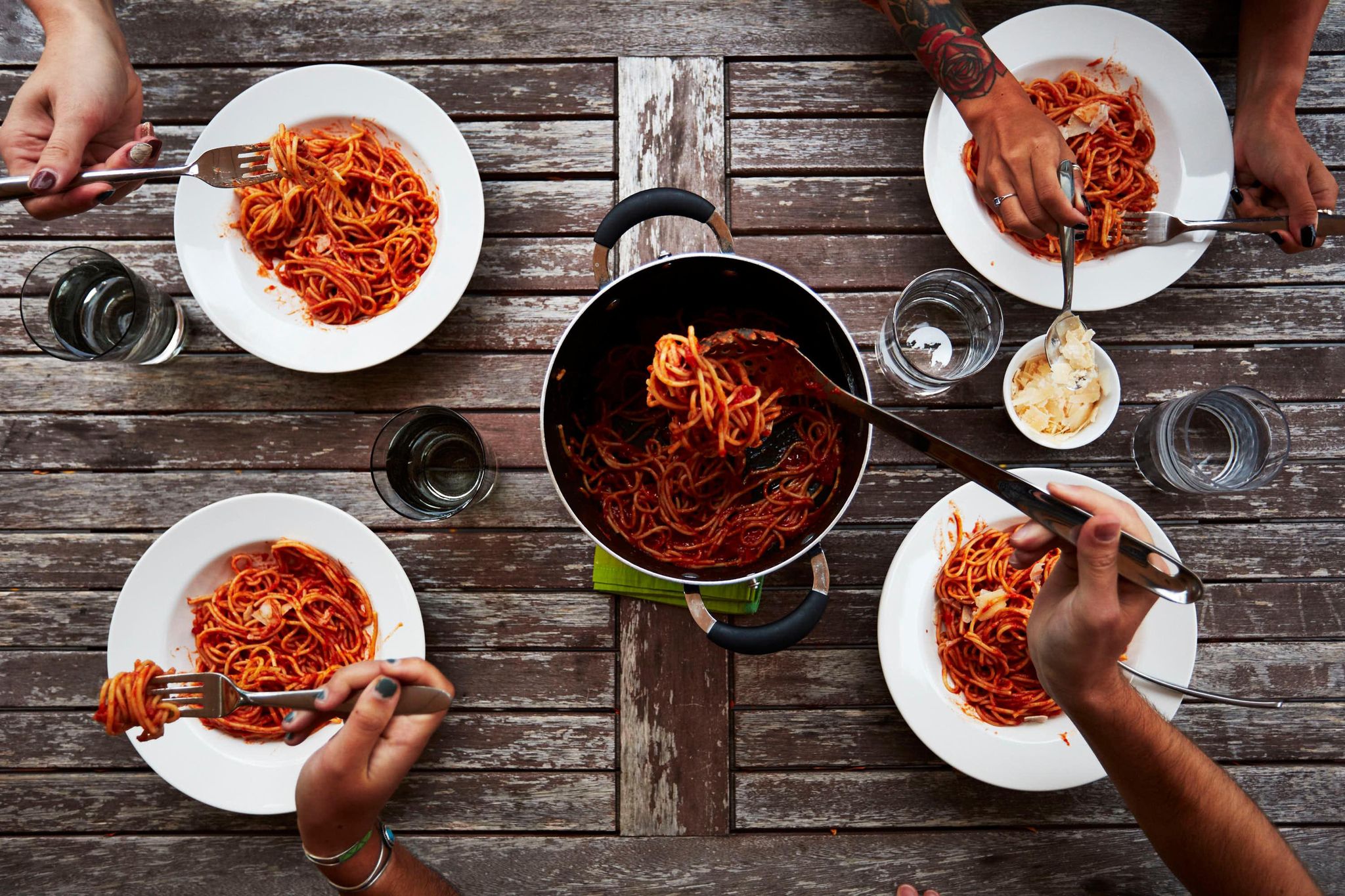 Running has celebrated the benefits of carbs through one proud tradition: the prerace pasta dinner. It’s an institution. Today, the Boston Marathon hosts a sponsored dinner of “prerace favorites” like penne marinara and mac and cheese; New York City marathoners enjoy a meal from Tavern on the Green the night before the race; and if you run the Mount Desert Island marathon in Maine, you’ll have the chance to carbo-load with pasta and lobster.

But carbohydrates are rarely “allowed” in today’s fad diets. Some shaky studies have empowered fit-fluencers and health gurus to preach against carbs as making you sluggish, assaulting you with unwanted cravings, and stunting your body’s fat-burning process. Now, running’s favorite meal faces a tougher uphill battle than Heartbreak Hill. For the prerace pasta dinner to overcome the backlash, it won’t just take a reexamination of the science, but a reaffirmation that few things foster a running community like a warm bowl of bucatini.

Alex Goldberg’s pasta passport has a lot of stamps. Every marathon eve, Goldberg, who ran varsity at Washington University in St. Louis and finished Boston this year in 2:36, seeks out a local bowl of pasta in the marathon’s host city and fuels up. At Wash U, Goldberg and his distance-running teammates ate at pasta chains like Noodles and Company before meets across the Midwest, and he has particularly fond memories of the high-school Friday nights when he and his cross-country friends convened at Olive Garden to shovel down carbs (and suck up to the upperclassmen) in advance of race day.

“At the start of your freshman year, those dinners gave you the chance to hang out with people a lot older than you and learn from them,” Goldberg says. “By the time you’re a junior or senior, you’re the one organizing things, setting up rides for freshmen.”

Many runners have vivid memories of prerace pasta dinners, but those meals fuel more than inside jokes among friends and camaraderie among teammates. They help prepare athletes to perform at a PR pace.

Carbohydrates are the human body’s gasoline. But while “human plus carbs equals running” seems like a simple equation, the macronutrient is still misunderstood, in part because carb-rich foods have been demonized by diet culture and cast off as one-way tickets to an expanding waistline.

The body converts carbs into glucose, a type of sugar that all kinds of organisms, from bacteria to the Backstreet Boys, use for energy. Simple carbohydrates, found in foods like fruit and milk, can be converted into glucose quickly for short, powerful bursts of energy—the final sprint toward the finish line—while slower-burning complex carbs found in foods such as whole-grain pasta, rice, and potatoes take longer to become an energy source. They, along with fat, help your endurance.

A productive prerace pasta dinner will give your body enough carbs to storesome for later use, says Keri Gans, a registered dietician and nutritionist in New York City. Your muscles and liver store glucose as glycogen, so the more miles you put in, the more glycogen you need in the tank. Not enough, and you could hit a wall during your race.

“The more you’re running, the more carbs you need to fuel that run,” Gans says. “Those who are eliminating carbs [from their diets] are affecting their performance.” This is especially true for those who aren’t “fat adapted,” whose bodies have trouble transitioning from carb burning to fat burning. Those runners will have trouble finding energy once their carb supply is depleted.

But Hogan cautions it’s not adequate to gorge on spaghetti the night before a race. In fact, she says, last-second carbo-loading could lead to discomfort and gastrointestinal distress at the starting line. Instead of a hurried Michael Scott-style Alfredo binge, runners should consume about 4 grams of carbs per pound of body weight over the two to three days before a long run. The right prerace pasta dinner probably features plain pasta with a tomato-based sauce, plus lean meat or legumes. Cream sauces and dishes packed with raw vegetables, on the other hand, typically aren’t ideal for a prerace dinner, because their fat and fiber content could lead to stomach issues and feelings of heaviness during the race.

Done right, the pasta dinners boosts beginner runners and elites alike. Colleen Quigley and her teammates on the Bowerman Track Club have dinner together during training season, and in addition to DIY pizza nights and fish tacos from teammate Shalane Flanagan’s cookbooks, the Bowerman Babes make yogurt fettuccine, a dish Quigley’s dad made for her family when she was growing up in St. Louis. They’ll pair the pasta with an episode of The Bachelor.

“It’s a healthy version of Alfredo sauce,” Quigley says. “It doesn’t have any cream in it, but it’s one of those hearty, whole food type things where you’re like, ‘This is amazing, and it’s feeding my whole body and soul and heart.’”

The Boston Marathon’s official prerace pasta dinner is keen on the classic dishes marathoners love. These days, the menu is a little more inclusive—gluten-free pasta primavera and almond milk mac and cheese were on the table in 2019—but the values behind the meal haven’t changed since 1986.

“[The dinner’s] not just about fueling up’” says Katie Hawkes, who leads special events for the Boston Athletic Association. “It’s about the celebration of the racers’ entire experience. It really kicks off what they’re ready to do the next day.”

Despite festive dinners at events like Boston and pro-pasta preaching from elites like the Bowerman Babes, pasta’s carb content is still under fire from modern fad diets such as Whole30, juice fasting, and keto. These diets tend to restrict or eliminate entire food groups, and pasta is often on their “do not eat” lists. Of course, fad diets—much like an affordable, centrally located apartment or a love story on reality TV—are too good to be true: A 2012 Boston University study found 98 percent of subjects who lost weight with a popular diet gained it back within five years.

Melissa Wdowik, who founded the Kendall Reagan Nutrition Center at Colorado State University and studied the history of fad diets, says get-thin-quick plans tend to have a few things in common: They’re structured, finite, endorsed by someone prominent, and promise fast results.

“People try [fad diets] instead of committing to a change in lifestyle,” Wdowik says. “They try it, and if it doesn’t work, it’s not the individual’s fault. They think, ‘it’s not my fault, it’s the diet.’ And then the diet goes out of favor.” That’s how pasta met its fall from grace.

Low-carb diets became trendy in the ‘90s after low-fat diets failed to curb America’s climbing obesity rate in the ‘70s and ‘80s. Wdowik explains the low-carb endorsers of the time didn’t differentiate between healthy carbs in foods like pasta and unhealthy carbs in processed foods. So before you could say “Atkins,” the spaghetti bolognese was thrown out with the Big Macs. The remnants of this carb backlash still manifest today. Pasta sales are down year over year, the demand for pasta fell 3.6 percent from 2015 to 2017, and the prerace dinner must now reckon with a legion of Instagram influencers toting cauliflower pizza crusts and plant burgers wrapped in lettuce.

There’s an abundance of “health” advice at your fingertips. The problem is these voices are far from equal. “If the layperson sees someone with a lot of followers making pretty food and telling them not to eat carbohydrates, they’re likely to believe them,” Hogan says. “But there’s no dividing line between people who can authoritatively talk about nutrition and someone with an Instagram account.”

Influencers aren’t the only ones coming for pasta’s good name, however. The anti-carb trend has been bolstered by published research in prominent journals that states the macro boosts the body’s insulin levels, which prompts cells to store extra fat. Those who support this theory—generally referred to as the carbohydrate-insulin model—posit that when insulin levels go up, the body burns carbs instead of fat, leading people to crave more carbs and potentially eat more than they should.

But this model, and anti-carb research in general, is controversial. Researchers who reviewed the science behind the carb-insulin model in 2017concluded several aspects of the model had been falsified by other studies.Additional studies suggested switching to a low-carb diet had minimal impact for people trying to lose weight compared to a balanced diet. More research is needed, but in the meantime, it’s OK for runners to have a plate of pappardelle.

Pasta still looms large in both running culture and Americans’ collective food consciousness. Not only did pasta unite the cast of Jersey Shore over family dinners, but Eat, Pray, Love featured Julia Roberts slurrping tangles of spaghetti, The Godfather showed Al Pacino learning to make meatballs, and the Lady and the Tramp shared their iconic dinner for two. If the Tramp had been watching his carb intake, he and Lady would have had to attempt a pooch smooch over a flimsy zucchini noodle, and there’s nothing romantic about spiralized vegetables. An al dente piece of spaghetti was paramount to puppy love.

Pasta’s love language translates to running, too. Quigley says group meals have strengthened her relationships with the Bowerman Babes, and the team has become a family to her.

“Those dinners are really important for our team bonding and spending time together outside of the track,” Quigley says. “During practice, you’re there to work and get a job done. But this is relaxation time.” Pasta dinners might actually help the Bowermans unite on race day, too. A 2015 study found that firefighters who ate meals together performed better as a unit when things heated up.

And for Goldberg, the Olive Garden dinners he shared with his high school teammates represent the most important part of running: sharing experiences with people you care about.

“There was that element of a team coming together and bonding,” he says. “Not just the seven varsity runners, or the three or four people you trained with at practice, but everyone. We’d get together at Olive Garden, eat, and be a goofy, nerdy, high school cross country team.”