May 15, 2004, as if I had my first-born child …… what a fantastic date. Winner of the UFC 2004 after a very exciting week. Sporting in a fairytale-like “luxury Jan des Bouvrie” environment for a week allowed to stay on the beautiful island Curaçao.

I was triggered by national newspaper De Telegraaf article and the TV broadcasts in the previous years …. I wanted to join the UFC, the variation in competitions! I enjoyed many sports and I was able to do a lot of things. The UFC was a mental, tactical and physical battle between the ladies. The preselection’s with only standing in your bikini or evening dress were a totally new experience for me. Instead of showing your bikini on heels, I was just barefoot! Still, I came through that selection and was then allowed to the quarter finals. 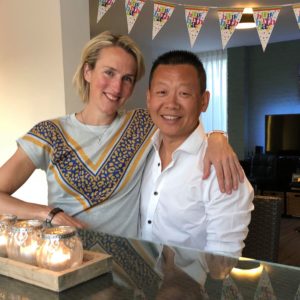 Staying on army beds in tents at the Dutch Marines, survival, assault course, running in the woods, everything was like playing in a playground with a huge motivation… enjoying that this was all set up for us and that I could go to the limits of my ability! No bikini walking this time and I was through to the third round to the finals!

The semi-final was a bit later, I could have trained very diverse. Often together with Choon, my buddy and for years my husband. Looked what the previous years were for competition parts and based my training schedule on this. Walking on the dike near Hoorn (my home town) where we lived then and then fantastic speed runs in a storm before the wind …. as if you could fly … what a fantastic feeling that I could prepare myself for this semi-final. The days themselves in Den Helder and Texel at the Marines Base were so cool! The variation in competitions, the abseiling of a 75 Ft. tower, leading a team because I was designated as captain, in a rubber marine raft in which meanwhile another lady’s wanted to be the captain, the ships dock …. wow that was pure sensation … 200 Ft. in height and then as quickly as possible over those boardwalk … enjoy 100% go !!! Then fill in a puzzle on the ground … what was I thinking I thought then! 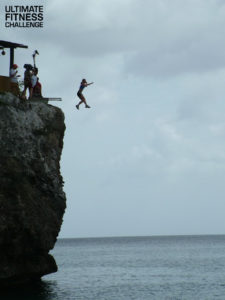 I finally became 4th in the selection and just before I left a Marine said to me “you are going to be gold in the finals …..”. Well I thought, crazy Jack got that right! During the semi-final I got more contact with Carla Hoitinga. She lived in Amsterdam, not far from me. We trained several times in the weeks to the finals, she is very dear to me. Wonderfully down to earth, straightforward and hard work, that was Carla.By the airplane to Curaçao, the atmosphere between the participants was good. Of course, exciting to see everyone again after a pre-selection. You didn’t know what everyone else had done in terms of training in the meantime. On arrival we went to this fantastic hotel (Floris Suite) in this luxury as “student and gymnast trainer at the time” I had never spent a vacation) where we also had to go straight on the weight-scale. This because of the Bench press and Lat pully weights disciplines… I can still find it strange that it had to be weighted; after all, weightlifters also do the same weight no matter how big or small someone is …. Anyway, I join in everything and let the best win!The food, the hotel rooms, transfers, marines, crew of the UFC and the variety of competition elements were fantastic. From archery and running to jumping off a mountain into the water and canoeing. Bench presses and then climbing over a rope with sharks in the pool below and huge turtles under you and swimming again ….. Running, cycling, swimming and then getting a disqualification of x number of seconds because you did not perform the frog jump well …. I was pissed off, pissed off and sad at the same time. I had frogs but my head was submerged because I knew that you could push away directly from the bottom with more force from your legs and could make speed … An eye opener was… get yourself a coach! That’s a part of the explanation. Crying on the toilet, get yourself together and here we go again! I won the next race again and got my confidence back.

The evenings were filled with the catwalks (be the best looking). The first time it was announced that a call-out was being made I still had to ask the lady next to me what we should do ….. Take a step forward to the jury ….. and yes, so I had to do as a “rookie” I was. Where there were really natural talents on the catwalk within our group of ladies, I was more of a fish in the water in terms of sports than walking on a catwalk or standing still with a nice smile for the jury. I like to do a performance but in the sense of nice dancing or in the past doing a free exercise on music with jumps and turns …. but of course, that was not possible on the catwalk. I started to enjoy the catwalk more as the days went by. The last day was coming up and I was often the winner of the sports disciplines and was in a fantastic 2nd place behind Helga Vuur. The last day I really wanted to win the sporting disciplines again. We had the latt-pull-down component with half your body weight (that’s why we had to weigh). For me then 29 kg. I was one of the longer participants so I knew I had to move my arms very quickly to make more repetitions than the smaller ladies in the competition. The weight was not really heavy for me, so I started raging like a madman, pulling the entire device on my belt ….. I was shocked too. After an hour a new cable had been obtained somewhere from the island and I was allowed to use it again, but then more slowly!!!! What was I thinking …? I only want 1 thing and that’s WINNING. With a little more policy, I concorded that minute and won this competition too.I had traveled to Curaçao in my own and I am extremely grateful to Carla for her mental support that week. She had had lung problems in the preparation which prevented her to go full force in the disciplines. Carla has made me do smart things and learned and made me laugh enormously! 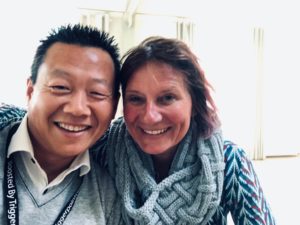 My husband Choon with Carla, so proud of…

The evening dress catwalk the last evening was a dream, that went great and that is how I felt. We were made up as princesses by the team of Kees from the UFC. The surprise was great when I finally turned out to be the winner. After all the days 2nd I still succeeded, 1st place in the final. Kees van den Berg, the initiator of the UFC, had organized fantastic events with beautiful people and skilled crew members. Out of all that I finally received a great brand-new Renault Clio because I was the winner of the UFC 2004. To this day, I still think that is special! I no longer have the Clio, the great memories of everything remains.

The after party was super organized with great music and lots of dancing happy people. Well, the only downside to the UFC is after the competition. Coming home with your story without anyone in your circle experiencing it with you. The TV broadcasts on RTL afterwards were enormously cool to see, a sort of déjà vu. I have often been asked why I was so “little” in the picture or in the newspapers as a winner. Then that did something to me, as if I had to explain me winning, now years later I can put it into perspective. 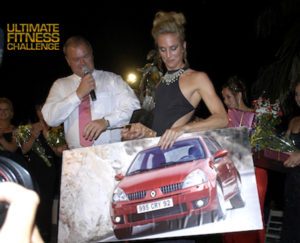 I would like to encourage all future UFC participants to enjoy in particular the places where the competitions are held and to fully go for it. My slogan then was: If you want to achieve your dream, stop dreaming and get to work!

Good luck together, make it a fantastic year with great achievements and victories.