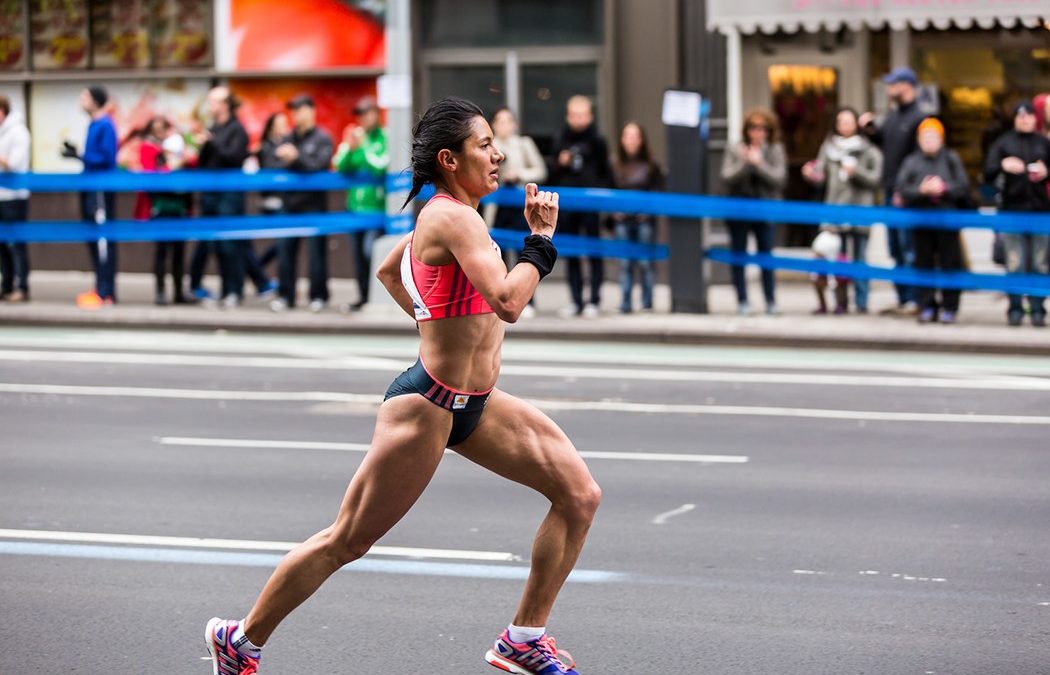 Love it or hate it, the taper is one of the most important aspects of marathon training and key to performing your best on race day.

If you’ve ever trained for a marathon, then chances are you’ve heard about (and either love or hate!) the marathon taper. A taper, or tapering, refers to the reduction of exercise before a competition or race. Tapering is one of the most important parts of your training and a key to performing your best on race day. Research has even shown that it leads to improved function of fast-twitch muscle fibers, which can result in faster race times.

But in many cases, tapering is also one of the hardest parts of training to implement. We all tend to struggle with cutting back on running as we fear doing so will hurt our performance before the big race. 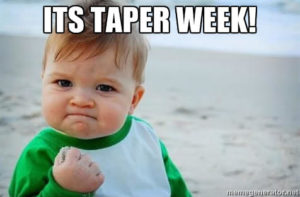 But the truth is, reducing mileage is important not only to allow for full recovery before your race, but also to allow you to reach peak performance in it, too.

You’ll usually begin to taper about three weeks before your marathon, right after you’ve completed your last long training run. You’ll be running less and recovering more during those final 21 days. And for some runners, that just sounds counterintuitive. But if you skip the taper, you might set yourself up for some problems, both in the race and for recovery down the line. As you become more experienced, you’ll be able to fine-tine your taper and customize it with each marathon, but until then, here’s everything you need to know about how—and why—to taper before a marathon.

The Benefits of Tapering Before a Marathon

“So many runners train hard right up to the day of the marathon because they’re desperately afraid of losing fitness if they don’t,” says Patti Finke, director and founder of the Portland (Oregon) Marathon Clinic. “What they don’t realize is that in those last few weeks, it’s the rest more than the work that makes you strong. And you don’t lose fitness in three weeks of tapering. In fact, studies show that your aerobic capacity, the best gauge of fitness, doesn’t change at all.”

Research supports the tapering aspect of these training plans. A review of 50 studies on tapering published in the journal Medicine & Science in Sports & Exercise shows that levels of muscle glycogen, enzymes, antioxidants, and hormones—all depleted by high mileage—return to optimal ranges during a taper. The muscle damage that occurs during sustained training is also repaired.

If that isn’t enough, immune function and muscle strength improve as well, which reduces the odds you’ll catch a cold or get injured just before the race. And get this: The average performance improvement by the subjects who tapered in these studies was 3 percent. That works out to five to 10 minutes in a marathon.

The review’s main conclusion? “The primary aim of the taper should be to minimize accumulated fatigue, rather than to attain additional physiological adaptations or fitness gains.” In other words, it’s time to chill.

4 Items You Need to Pack for Your Marathon

How to Taper Before a Marathon

The following plan shows you exactly how to modify your run training and nutrition in those three crucial weeks before you toe the line. If you decide to run more marathons, you’ll be able to tailor your taper to work best for you. Until then, relax—we’ve got you covered.

Week 1 of the Taper

Because the taper follows a fatigue-inducing period of high mileage, you’ll likely welcome these first few days of cutting back. The combination of decreased mileage and increased rest can be invigorating—expect to feel excited, anxious, or both.

Week one begins the day after your last long run of about 20 miles, and should fall around three weeks before the marathon. The taper starts gradually because this training still “counts,” and a dramatic drop in workload isn’t necessary yet.

The week before should have been your highest-mileage week. This week, stick with the same basic running schedule you’ve been following, just decrease your total mileage from last week by 20 to 25 percent. This week gives your body a chance to recover from all that hard work by restocking depleted glycogen supplies and repairing tissue damage.

You should also avoid running extremely hilly courses, hill repetitions, or speed workouts, which can cause the kind of muscle tissue-damage you want to minimize during your taper.

Your shorter weekday runs shouldn’t be much different than last week’s, but shave a mile or two off your longer midweek runs. Generally, weekday training should consist of one medium long run of eight to 10 miles, one marathon-goal-pace run of four to six miles, one non-running day, and two runs of three to five miles.

Your weekend long run on the first week of your taper (two weeks before the marathon) should be a 12- to 14-miler at the same pace—not faster—as the previous week’s 20-miler.

Except for your marathon-goal-pace run, all running this week should be at a relaxed pace of one and half to two minutes slower per mile than marathon goal pace.

As for nutrition? Make protein a priority.

“Take in a lot of protein this week to aid in the repair and recovery of muscle tissue damaged during the high-mileage phase of marathon training,” says Alan Tichenal, Ph.D., a University of Hawaii sports nutritionist and 20-time finisher of the Honolulu Marathon. Shoot for 75 to 100 grams of protein per day. If you don’t eat meat, fill up on protein from eggs, beans, dairy, and soy products.

To strengthen your immune defenses and possibly prevent a cold or flu, load up on vitamin C. Kiwis, orange juice, red bell peppers, broccoli, and strawberries are the most potent food sources. The amino acid lysine can also help too. Wheat germ or a 500-milligram supplement are the best vegetarian options.

Week 2 of the Taper

Week two is a transitional period. You’re halfway between the agony of your last 20-miler and the ecstasy of the marathon. Rest truly replaces training as the most important element of your race preparations, and race strategizing takes on increasing importance.

Your mileage this week should be about one-half to two-thirds the amount you ran during your highest mileage week. Almost all runs should be slow—about one and a half to two minutes slower than marathon goal pace—except for a two-mile run in the middle of a midweek four-miler at marathon goal pace.

“Even this small amount of goal-pace running is important because it physically and mentally reinforces the pace you want to run on race day,” says Finke. “This follows the rule of specificity—simulating as closely as possible what you hope to do in competition.” It’s also fine to throw in a few 100-meter strides after one or two workouts just to help you stay smooth and loose.

Your weekday short runs should not exceed four miles, and your longest weekday run should be between six to 10 miles. Your weekend long run—one week before the marathon—should be eight to 10 miles. Any longer and your muscles may not be able to fully rebound before the race. Plus, if you’ve been lifting weights during your training, you should pause during this week.

If you’re targeting a time goal, do the following key workout during one of your longer midweek runs. Warm up for 10 to 15 minutes, then run one mile at 30 seconds faster than marathon race pace, followed by one mile at 30 seconds slower than race pace. Repeat two to four more times. When it comes to the track, if you usually run 10 x 400 at the track, adjust that workout to 8 x 400 during this time. Rest two days during this week.

While your mileage may be dwindling, you need to keep those calories coming in. Your body still needs to repair tissue damaged during your mileage build-up. “This is no time to diet,” says Tichenal.

Even though you’re running less, resist the temptation to cut way back on fat. A reasonable proportion of dietary fat (30 percent of your daily calories) is beneficial because it can be accessed as a backup energy source when stored carbs are used up.

Week 3 of the Taper

At this point, it’s all about staying rested and getting mentally prepared. This week, aim to sleep eight hours a night and stay off your feet as much as you can—reducing stress on your body will allow it to top off its glycogen stores and maintain adequate hydration levels. To combat nerves, schedule movie nights, start a new book, or visualize races you’ve enjoyed.

Beginning on Monday, do no runs longer than four miles. And when you do head out, remember that these jaunts are more for your head than your body, because training has little effect this week. 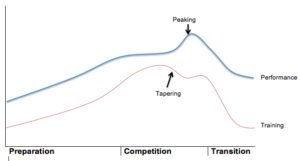 Almost all running should be done at one and a half to two minutes per mile slower than marathon goal pace—except a Tuesday two-miler at marathon goal pace, sandwiched by one-mile jogs. Again, if you want, throw in some quick 100-meter strides after one or two of your workouts. This helps fight off the sluggish feeling that can occur during the taper.

As for nutrition? Follow this guide on how exactly you should carb load before a big race.

Wash all those carbs down with fluids so your energy and hydration levels are high on race morning. Alcoholic beverages don’t count toward your fluid totals, however, and you’ll need to make up for their diuretic effect by drinking extra fluids. You know you’re adequately hydrated if your urine is clear or pale yellow in color.

Don’t restrict the salt in your diet. Low salt intake combined with excessive hydration can lead to hyponatremia, a rare but dangerous condition that can afflict marathoners. Drinking sports drinks and snacking on salted popcorn and pretzels will help keep your sodium levels up.

Beyond that, do your best to relax. The hard work is done; all that’s left is showing up on race day, doing your best, and having fun!