7 Unexpected Benefits of Blueberries You Probably Didn’t Know About 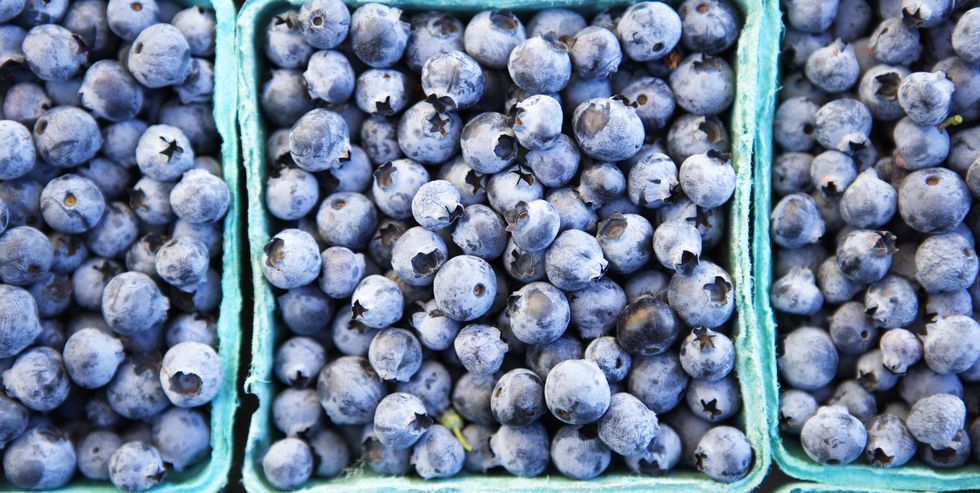 Sure, the little blue fruit is chock full of antioxidants, but new research shows eating a handful can boost your health in so many more ways.

That bright blue color of blueberries offers so much more than just a ‘grammable breakfast or snack. A handful of the little blue fruits has some serious health benefits. Everyone knows they’re chock full of antioxidants, but what you might not know is all of the other benefits you can get by adding blueberries to you diet, even some that come from the berry’s hue. Read on for more health benefits of blueberries you can feel good about.

A recent study in the Journal of Gerontology found that adding blueberries to a person’s daily diet can help reduce blood pressure, similar to the effects of blood pressure medication. Researchers concluded that this may be due in part to the anthocyanin—a type of flavanoid that provides antioxidant effects and gives blueberries their bright color.

That anthocyanin we mentioned? It’s also known to reduce inflammation, according to a study in the Journal of Agriculture and Food Chemistry. Chronic inflammation can be a cause of cardiovascular disease, Alzheimer’s, and certain types of cancers.

A study in the American Journal of Clinical Nutrition found that when anthocyanin was added to one’s diet, it slowed lung-function decline in older adults. Consuming two or more servings of blueberries a week was associated with the slowest rate of annual decline in lung function.

[Kettlebell Exercises to Boost Your Leg and Lung Power]

The antioxidants in blueberries can help reduce inflammation and accelerate muscle repair after workouts, according to a study in the Journal of the International Society of Sports Nutrition. Adding them to a postworkout protein smoothie is a surefire way to reap the rewards.

[This Lower-Body Exercise Can Cut Your Injury Risk in Half ]

Along with many physical health benefits, blueberries have also been found to improve mental health. A study in the Journal of Agricultural and Food Chemistry found that adding blueberry juice to the diet of older adults improved memory recall and reduced depression symptoms.

Additionally, a study published in the Annals of Neurology found that the flavonoids in blueberries were associated with delays in cognitive aging. Adding at least one serving of blueberries a week to their diet slowed cognitive decline in older adult women by two and a half years.

New research published in the American Journal of Clinical Nutritionfound that eating one cup (150 grams) of blueberries daily reduces the risk of cardiovascular disease by up to 15 percent, especially in those who already are at risk for heart disease, stroke, and diabetes. This is likely due in part to the all-powerful anthocyanin.