Banza vs. RightRice — how 2 low-carb rice alternatives stack up in taste and nutritional value 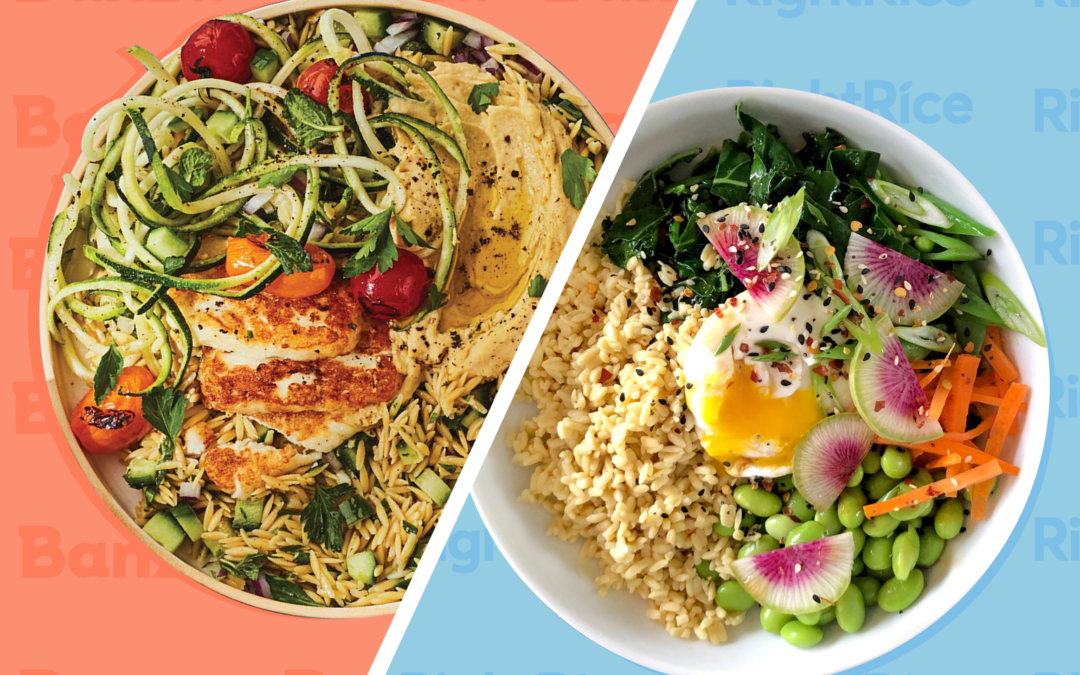 Whatever food or snack you love, there’s probably a more nutritious, “better-for-you” version of it out there. Noodles made from spiralized zucchini, pizza crusts made from cauliflower, and sweet treats made from dried fruit rinds just scratch the surface of ways you can make your favorite food healthier.

Rice, the thousands-year-old grain that cultures around the world enjoy, is also getting the better-for-you makeover.

Two food brands, Banza and RightRice, are taking on the beloved grain with rice made from alternative ingredients — Banza’s primarily with chickpeas, and RightRice’s with a mix of lentil, chickpea, pea, and rice flour. While they cost more than traditional white rice, these new rice products are perfect for anyone watching their carb, fiber, and protein intake. To their credit, they also cook and taste like white rice.

Banza is best known for its chickpea pasta, and rice is the second product category created by the startup (which got a boost with help from the Chobani Food Incubator). Meanwhile, RightRice concentrates solely on rice.

We tried both companies’ rice and loved them as tasty, nutritious alternatives to traditional white rice. To help you decide which one you should cook with, we broke down their similarities and differences in a few categories.

The “winners” of each category (comparing only the rice alternatives, Banza and RightRice) are bolded and highlighted. Both Banza and RightRice have 10 fewer grams of total carbs than white rice and more than five times the fiber. Banza slightly edges RightRice out on calorie and protein count, and has half the sodium content. Based on nutritional content alone, Banza beats RightRice.

You cook Banza and RightRice as you would cook traditional rice on a stovetop. At this time, neither is recommended to prepare in a rice cooker.

How to cook Banza rice

How to cook RightRice rice

Though RightRice took longer to prep, I personally liked that I didn’t have to babysit and stir it. It required less water and once off the stove, I could just let it sit and cook by itself. However, if you’re pressed for time, Banza might be the better option.

Banza’s rice is a longer grain than RightRice’s, and the overall taste and texture of both are impressively close to that of white rice. Banza’s and RightRice’s rice are fluffy and chewy, with a faint nutty taste that serves as a great neutral base for any meal or recipe. I usually make rice bowls or use them as a side to protein and vegetables, but you can also use the rice for dishes like paella and arancini. Unlike cauliflower rice, these rices will actually fill you up and leave you feeling satisfied.

If you also want flavored options, RightRice is a better bet. In addition to the plain, Original version, it comes in Garlic Herb, Lemon Pepper, and Spanish flavors online, as well as Thai Curry in Kroger stores.

Price and where to buy it online

Both come in six-packs for around $24 and are available to buy on Amazon. Prices on Amazon can fluctuate, but right now Banza is slightly cheaper per ounce.

They’re both more expensive than regular white rice, so depending on your budget, these alternatives may not be a sustainable, long-term purchase. However, they’re great to supplement your existing diet. If you eat rice five times a week, for example, you could eat Banza or RightRice for two of those meals, and you wouldn’t have to spend too much extra money.

I grew up eating rice every day, so I’m picky about any rice alternatives. I love Banza and RightRice’s more nutritious takes on this grain staple and could gladly eat both when I want a healthier rice. Here are some things you should consider when deciding between the two: