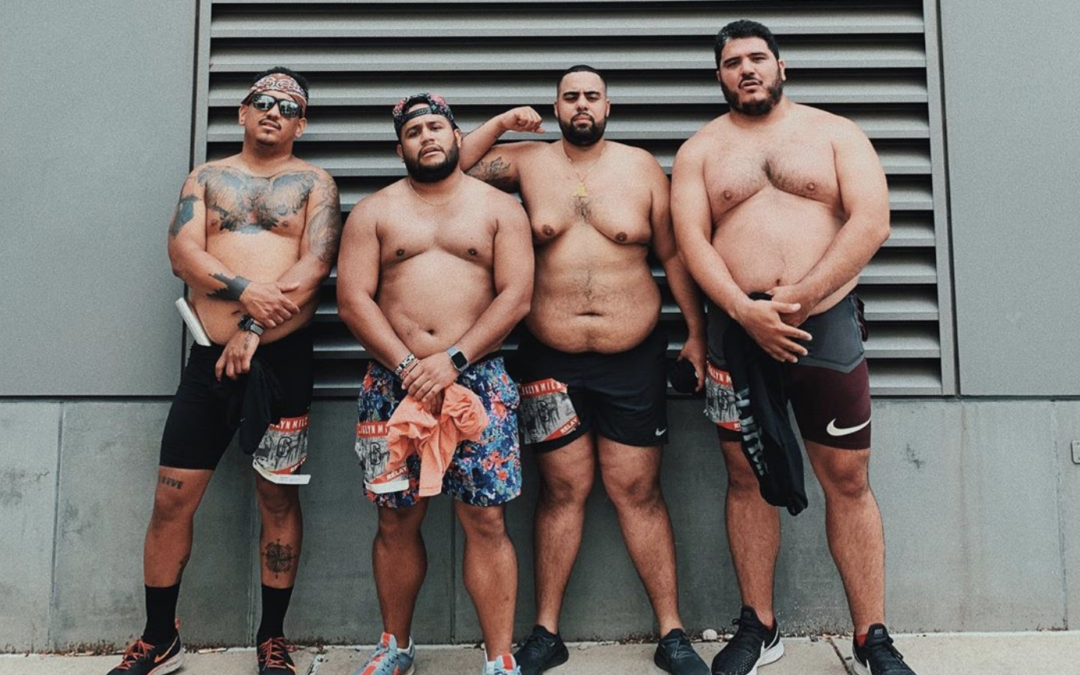 As a follow up on our blog on the 17th this week, yes you can… The Pansa Boyz are here to run. They don’t care what you think.

Tyrone Alomia remembers exactly when he started running in May 2011. He was working at the old Nike flagship in New York City, and his boss challenged him to run a four-mile New York Road Runners race around Central Park. Alomia was standing at 6 feet 2 inches and weighed 330 pounds at the time, and the race would be the first four miles he’d run in his entire life.

“He saw how unhealthy I was but knew I had potential,” he tells Men’s Health. “At the time, I couldn’t even run a few blocks without stopping.” In a total downpour, the Brooklynite finished the race without slowing to walk once. Six months later, he’d complete his first marathon in under six hours. Nine years later, the 32-year-old is now down 30 pounds and on the cusp of breaking that two-hour half-marathon barrier, his loftiest goal.

“Running is both the hardest and most rewarding thing you can do for yourself,” he says. “I came from a neighborhood where health and wellness isn’t the first priority on everyone’s list. But when I found running, I became better.”

If you ask Alomia’s friends Jason Suarez, Hector Espinal, and Emmanuel Rodriguez how they feel about the sport, they’ll all express similar feelings. Finding running has made a major impact in their lives, too. These four guys—who’ve adopted the nickname “Pansa Boyz” (“panza” the word for “belly” in Spanish)—weigh almost a ton combined. Recently, they teamed up to relay both the North Face Endurance 50K Challenge and the Brooklyn Mile, the native New Yorkers aren’t slowing down anytime soon—at least not because of their size. “If track and field had weight classes, technically we would be world record holders in the 4×4,” Suarez captioned a photo of the squad after their 6:06 Brooklyn Mile relay finish.

The former collegiate 47-second 400-meter runner admits that getting out on the road can be a hurdle in and of itself—but doing it shirtless when you’re a bigger guy is an entirely different challenge. Even so, his crew helps to cut down his doubts and insecurities. 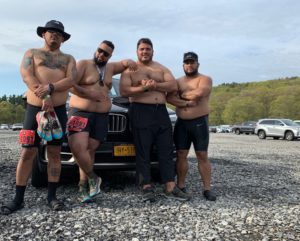 “WHY AM I ANY DIFFERENT? THERE SHOULDN’T BE A DOUBLE STANDARD.”

“These guys, they’re getting me to be more comfortable in my own skin,” he says. “What I was able to do in high school and college, I’ll likely never do that again. I’m letting go of the past and looking forward to what’s to come. Doing it with my friends every week makes it better.” He says his goal is to cross off all six world marathon majors by the end of 2023, qualifying for Boston as his last.

For Espinal, running—and doing it with his shirt off—is a no-brainer at this point. “Would you tell that to a dude that’s 6-foot-1, 105 pounds, to cover up if he had his shirt off?” he asks. “Why am I any different? There shouldn’t be a double standard.”

Now, they guys are making an impact on others. Founder of We Run Uptown, a running crew out of Upper Manhattan and the Bronx, Espinal remembers logging his first-ever runs at night about six years ago, running the 20 blocks down and back from 165th and Riverside Park. Now down almost 100 pounds, he wants those hesitant to lace up and move to ask: “Why not me?”

“For the people who look at me and wonder if they can run, too, you’ve gotta ask yourself: Why not do it now?” he says. “Are you stopping because of what someone else thinks? Is the cab driver gonna heckle you? Are you worried about running into someone you know? It’s nice when people tell me that I inspire them, but I want them to find inspiration inside too.”

Rodriguez agrees. “I want to touch people,” he says. “I want to open a conversation. You’re an athlete just as you are. Don’t let anyone try to define that for you.”

These guys are strides ahead of most men when it comes to embracing their size and the body positivity movement. Research shows that 38 percent of guys would give up a year of life for the “perfect” body, and guys tend to be quieter about their body negativity, seeking treatment less frequently or holding off on treatment longer than women due to shame.

“Most guys have an unattainable cultural ideal that being tall and muscular equals strength, which creates internal discomfort, consternation, and negative emotions—all of which then can lead to serious health problems,” says Brian Cook, Ph.D., VP of Movement, Research and Outcomes at Alsana. “Most think that it’s more masculine to suck it up, not talk about it, deal with it yourself, and pretend everything’s fine.”

As a 300-pound runner, Alomia thinks that there needs to be more of a dialogue about what the athletes you “don’t see on magazine covers” need. “Look at almost any brand out there, and they don’t make clothing that fits me as an athlete,” he says. “I have wide shoulders and a big chest, and the way that the marketing is—it’s hard not to wonder, ‘Am I supposed to be doing this, being this big?’” 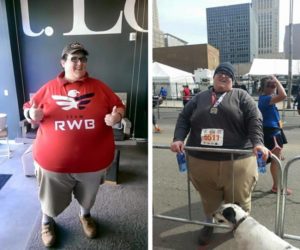 “NO MATTER WHAT ANYONE ELSE THINKS ABOUT ME RUNNING. I’M GOING TO DO THIS REGARDLESS.”

For Rodriguez, that’s a resounding yes. Catching his breath after the June mile on Kent Avenue, he got a text message from an old coworker that read “you make me feel comfortable about running in a tank top. I’ve always been self conscious about my body, but you’re changing the way people think, man.”

“I just want to run,” says Rodriguez. “No matter what anyone else thinks about me running. I’m going to do this regardless.”

As for what’s next for these four athletes? Suarez and Espinal are both signed up for the upcoming Chicago Marathon in October. Rodriguez and Alomia are taking on the Philadelphia Half together in November. And after that? Well, it won’t be long until the Pansa Boyz team up, all four of them, to conquer the next finish line—no shirts required.