New Systems Might Be Your Saving Grace From Injuries 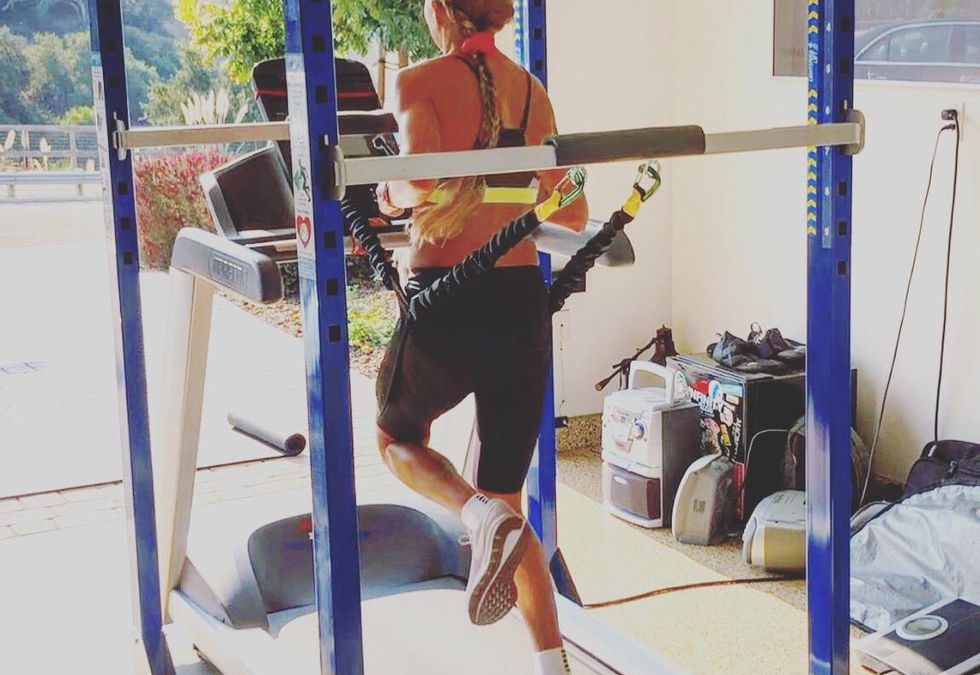 Two new devices that allow low-impact running are within many runners’ budgets.

A few decades ago, if you wanted to run with reduced bodyweight—either to expedite a return from injury or add volume without all the impact—an underwater treadmill was your only real option.

But unless you had access to one of the rare athletic facilities, hospitals, or other rehabilitation centers that had one, you were basically out of luck. Sure, you could maintain fitness by aqua jogging or working out on an elliptical or bike, but as far as simulating the act of running: no underwater treadmill, no dice.

That changed in 2005 when AlterGentered the market, and the anti-gravity treadmill originally created for NASA became a boon for banged-up runners. The innovation lies in the positive air pressure chamber that encloses a treadmill and the user’s legs from the waist down, and inflates to reduce his or her bodyweight in 1-percent increments.

This invention enables injured runners to return to training sooner, perhaps beginning at the lightest setting (20 percent of bodyweight) and inching upwards until they can run pain-free at 100 percent. Along with helping sidelined runners, it also benefits those who were injury-prone and healthy. Running even just a few percentages below bodyweight allows athletes to tack on extra mileage without the pounding, and it can also help prime runners for goal paces before they’re sustainable on land. 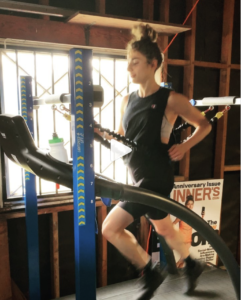 LightSpeed Lift, out of Duluth, Minnesota, uses its patented “Lift from the Hip” technology to “provide support right at the [runner’s] axis of movement,” according to sales and marketing director Bud Trnka. A frame akin to a power rack is installed around an existing treadmill, and support cords connect to the user’s hips via a company-made belt or pair of compression shorts.

By standing on a scale on the treadmill and adjusting the metal cross bars until the desired amount of bodyweight has been offloaded, running impact force can be reduced between 20 to 40 pounds, without inhibiting stride or arm carriage. The crossbars can easily be removed from the frame while the system is not needed.

Although LightSpeed Lift was born in 2011 when physical therapist Malcolm Macaulay wanted to help the victim of a severe neck injury return to “his greatest love,” the contraption has since won over athletes of all stripes. Olympic runner Alexi Pappas says, “It makes training, recovering from workouts, and coming back from injury much more possible, feasible, and effective.”

Having recently used it to progress back to full bodyweight after a forced layoff, Pappas appreciates how its lean setup encourages natural running form. And now that she’s back to full training, her LightSpeed Lift comes in handy for warmups and cooldowns and on easy recovery days, in compliance with her coach’s orders to keep the pace quick but impact low.

Trainers and coaches are also on board. Cameron Garber, a physical therapist, coach, and the owner of Body Smart Utah, sees his role as keeping runners on the road. The LightSpeed Lift helps him do that.

“From a coaching standpoint, I love it because of the opportunity it has given my athletes to train at increased speeds with less impact,” Garber says. He notes that he especially likes it because it doesn’t encourage faulty mechanics like most harness systems he has used.

Ranging from $2,995 to $4,995, LightSpeed Lift allows small business, clubs, and individuals a more affordable way to pursue serious fitness goals than an underwater treadmill or AlterG—provided they already have a treadmill and don’t plan on moving it without some serious effort. 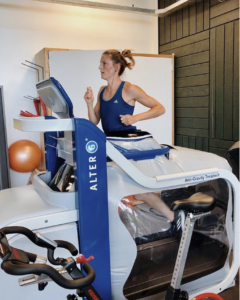 Lever Running, the Boulder, Colorado startup that launched last year, takes a different approach. Co-founder and former collegiate runner Brad Miles says, “We set out to create the first weight-reducing treadmill attachment that is completely mobile, meaning accessible for all athletes, wherever they want to use it—at home, at the gym, while traveling.”

With that in mind, the Lever Lyte-V was born. It weighs just less than 10 pounds, collapses to fit inside a tote bag, and assembles on top of any treadmill with horizontal arms in a few minutes. The device relies on a bungee cord that connects to the user’s Lyte-V shorts and reduces up to 45 pounds of bodyweight in five-pound increments, designated by marks on the cord.

Though still new on the market, Lever has a growing fanbase of dedicated runners. Parker Stinson, who broke the national 25K record in May, is among them.

“I really believe in taking a little bit of weight off when you can,” he says. When he was a college runner at the University of Oregon, Parker ran 15 miles a week on the AlterG; with Lever, he can replicate those workouts.

Marathon training requires a delicate balance of high mileage and quality workouts, and Stinson, who is preparing for the Chicago Marathon this October, thinks the Lever Lyte-V will allow him to stay healthy and train harder than ever before. Along with using it as an injury-prevention tool, he envisions taking it to big races and training camps in the future so he can freshen up when it matters most.

Priced just under $1,000, the Lever Running Lyte-V is accessible to even more athletes in need of bodyweight support, including individuals, high school and college teams, and sports clinics.

It’s doubtful that AlterG, with its many dedicated fans and a presence in over 4,000 locations worldwide, will be overtaken anytime soon. Over the years, AlterG has fine-tuned its mechanics, and it is likely more accurate (in terms of bodyweight percentages) than any other system on the market. But with newcomers like LightSpeed Lift and Lever Running stepping up to the plate, it’s clear that the bodyweight support system industry is changing, making it easier for runners to go farther by training lighter.