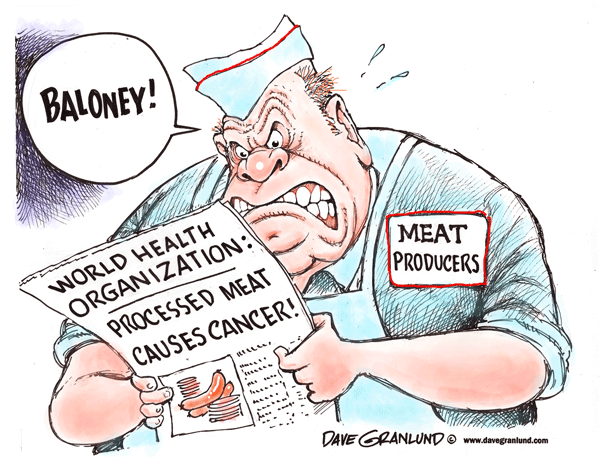 According to a recent study, your bacon or hot dog habit can cause some major health problems. Here’s what you can do.

Despite numerous studies—like this one, this one, and this one—linking processed meat to higher cancer risk and other serious health issues, Americans sure do love the stuff. In fact, a new study finds, we’re eating just as much of it as ever. 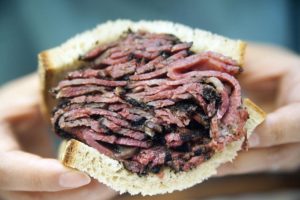 Published in the Journal of the Academy of Nutrition and Dietetics, the study found that the amount of processed meat eaten by Americans has remained unchanged in the past 18 years. Plus, even though research often touts the benefits of fish, we’re not eating more of it.

Researchers looked at dietary data from nearly 44,000 adults over age 20 who participated in the National Health and Nutrition Examination Survey, which tracked food intake from 1999 to 2016.

In that timeframe, processed meats actually increased slightly, from 182 grams a week to 187 grams. The top five types consumed were deli meat, sausage, hot dogs, ham, and bacon. Fish was a paltry 115 grams a week in 1999, and only went up by a single gram by the study’s endpoint.

By contrast, consumption of unprocessed red meat went down, from 340 grams a week to 284 grams, primarily due to lower consumption of beef. That seems replaced by chicken, which went up in consumption.

Researchers concluded that this is not great news. They pointed out there’s accumulating evidence linking consumption of processed meat not just to some cancers, but also obesity, diabetes, and cardiovascular diseases. 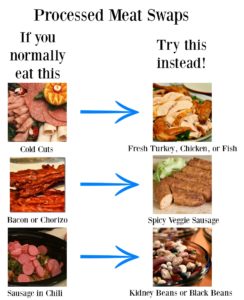 Other poor dietary choices such as low vegetable and fruit intake and high consumption of sugar-sweetened beverages heighten the risks even more, Zhang added. She said that about 5 percent of all invasive cancer cases among U.S. adults can be linked to poor diet. That’s slightly lower than alcohol at 6 percent and excessive body weight at about 8 percent. But it’s higher than cancers attributed to sedentary behavior, associated with 3 percent of cancer cases. 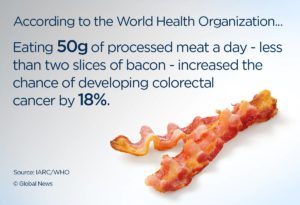 “In previous research, we estimated that more than 80,000 new invasive cancer cases in the U.S. among adults aged 20 and older were liked with poor diet, and processed meats are a large part of that,” Zhang said. “This, and other studies, underscore the need for improving the consumption of key food groups and nutrients in America.”

How bad is processed meat, though, really? Pretty bad, according to the World Health Organization, which classifies it as a “group 1 carcinogen.” Others in that category include tobacco and asbestos.

Minneapolis-based dietitian Cindi Lockhart, R.D.N. told Bicycling that normal risk for colorectal cancer is 5 percent, but when you eat just one hot dog or four strips of bacon a day, that jumps to 18 percent. For women, eating two strips of bacon or half a hot dog (but seriously, who does that?) daily increases risk for breast cancer by 21 percent. 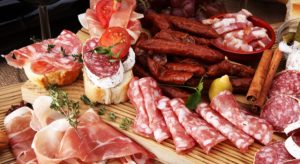 Here’s why the processing is the concern as opposed to the meat: Lockhart said that sodium nitrites in processed meat turns to a compound called nitrosamines, which as been shown to form cancer-causing cells, especially in the bowel and stomach. Meat smoking also creates a substance, polycyclic aromatic hydrocarbons, that’s also been linked to cancer.

Of course, there are options marked as “healthier,” Lockhart added. Those include deli meats, hot dogs, bacon, and sausage marked with terms such as ‘organic,’ ‘uncured,’ and ‘nitrate-free.’ But, Lockhart said, there hasn’t yet been research to prove these claims let you off the hook from the health risks of processed meats.

In terms of how much you can safely have, Lockhart recommends minimizing as much as possible. As in, not even daily, maybe not even weekly.

“A more important aspect is to look at the rest of one’s diet and lifestyle,” she said. “If you smoke, drink, are sedentary, and eating few plants but lots of processed meats, this is a serious issue.” If the only baddie on that list for you is the meats, it’s not as bad. But still, Lockhart stated, ditch it as a daily habit.