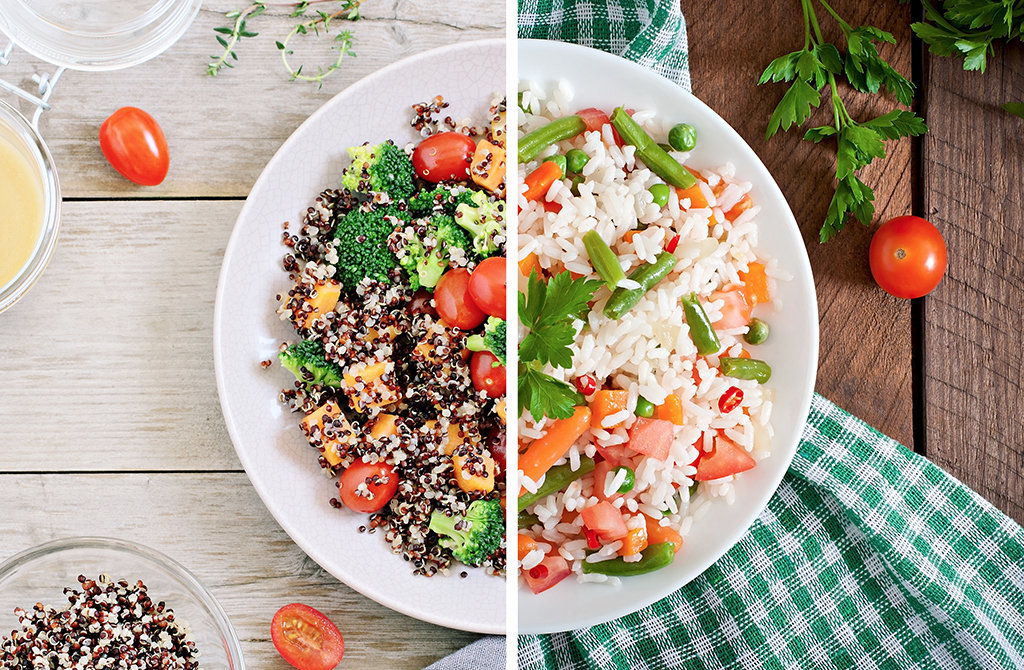 An R.D. explains everything you need to know about the grains.

Judging by menus everywhere, it looks like quinoa has officially dethroned rice as the carb of choice. But instead of completely overhauling your diet just because something’s trendy, it’s important to factor in nutritional value, as well as personal taste, which is something many of us forget to do, according to Valerie Goldberg, R.D.

“I have a firm philosophy that everything should be emotionally and physically satisfying. If you don’t like quinoa, don’t eat it. If you love rice, have it,” she says.

But, if you’re otherwise an open-minded eater, it’s worth exploring the differences between quinoa vs rice.

So, what makes quinoa so healthy anyway?

When quinoa became the “hot new thing,” the seed was celebrated for its protein content.

However, it’s the fiber content that makes it a true winner. “There’s more soluble fiber in quinoa, which reduces cardiovascular disease by lowering cholesterol levels,” she says.

Still, all that protein is cool, too. Protein not only helps build muscle mass and supports the immune system, but it promotes satiety. Goldberg says if you’re particularly hungry, quinoa is a great option.

It also contains numerous minerals and antioxidants, according to Goldberg: manganese, which helps absorb essential nutrients; phosphorus, which aids in bone health; and flavonoids, which may help reduce the risk of illnesses like cancer, Parkinson’s disease, Alzheimer’s disease, and more.

How about rice—is it healthy?

Somehow, amid the quinoa craze, everyone became afraid of rice. “We demonize anything that’s white like white rice and potatoes,” says Goldberg. But like any food, she says there’s a place for rice in a healthy diet.

Let’s get one thing straight: Not all rice is created equal. Brown rice, which contains the hull of the rice kernel, contains more nutrients and antioxidants than white, according to Goldberg, including additional magnesium, calcium, and potassium. 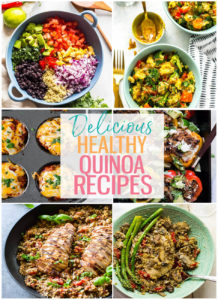 Plus a 2012 study from the British Medical Journal found that participants who consumed white rice had a significantly higher risk of developing type 2 diabetes than those who ate brown rice, so yes, brown is a healthier option.

White rice, on the other hand, has been stripped of the hull, leaving it with very little fiber and trace minerals, explains Goldberg. But that’s not always a bad thing. Its low fiber count makes rice an excellent choice for those with an upset stomach, or people struggling with kidney stones or gastrointestinal issues, according to Goldberg, since fiber can further irritate the intestines.

And what about those fancy rice varieties you see at health food stores? “Wild rice and black rice are actually much more similar to quinoa than white rice,” she says.

Okay, so quinoa vs rice: Which is healthier?

It’s impossible to say which one is healthier, since “it’s all about the balance of a nutritious diet,” says Goldberg, adding that you won’t notice any major health changes if you choose one over the other.

If you’re gluten-intolerant, gluten-sensitive, or have celiac disease, both rice and quinoa are fair game. To avoid cross-contamination, check the food labels to ensure neither have been processed in a facility that also manufactures wheat products.

And if you’re vegan, Goldberg says quinoa has a bit of an edge over its competitor since it contains all the amino acids that help your body digest protein.

Since both rice and quinoa are so versatile, they make a great addition to your grocery list no matter the type of eater you are. “Turn it into a version of something you really like,” says Goldberg.

Okay, so how do I prepare it?

Craving carbs yet? We don’t blame you. Try these mouth-watering recipes:

In this hearty side salad, experiment with unique flavors that totally taste delicious together.

Using quinoa as a grain alternative is a great way to up your protein intake while still respecting the chewy, soft goodness of a homemade muffin.

There’s something that feels so right about a Buddha bowl. Take your pick of white, brown, or wild rice (or all three if you’re feelin’ it).

Who knew you could fit an entire meal into a single vegetable? Stuffed with full-fat feta cheese, ground chicken, white rice, almonds and seasoning, you’ll be full—and happy—for hours.