Avoid the Most Common Weight Loss Mistakes With These 4 Strategies

It’s easy to get caught up with the number on the scale, but here’s why you shouldn’t.

In 2011, Allie Kieffer ran a 4:40.9 mile and placed third in the USA Track & Field Indoor Championships 3,000-meter event. She was fast. But she wanted to be faster. “We often hear that to run faster, you should lose weight,” Kieffer says. At 17 percent body fat, the now 32-year-old was already lean, but “everyone seemed leaner than me.” So, as she made the jump to the elite scene, Kieffer began cutting calories and fat. She lost 10 pounds and qualified for the upcoming Olympic Trials. She also developed a stress reaction in her tibia. Not only did running hurt, but “I spent hours a day tracking what I ate,” she remembers. “I’d lie in bed at night, hungry. Dieting basically ruined running for me.” The injury prevented her from competing in the 2012 Olympic Trials, and Kieffer didn’t run competitively again for nearly three years.

“I’D LIE IN BED AT NIGHT, HUNGRY. DIETING BASICALLY RUINED RUNNING FOR ME.”

The elite runner is not alone in using running and calorie-cutting to shed pounds. Among new runners, weight loss is second only to exercise as a motivator for lacing up, according to Running USA’s 2017 National Runner Survey. But dieting doesn’t always make the best running buddy. “People think they need to restrict a large number of calories to lose weight, but if you’re doing that while running, you’re burning the candle at both ends,” says Tavierney Rogan, M.S., R.D., a certified specialist in sports dietetics and Head of Nutrition at SHIFT. Possible fallout includes injury, burnout, and bingeing.

But when approached with a healthy mindset, weight loss is a totally reasonable endeavor. Here’s how to side-step the biggest weight loss mistakes people tend to make and use healthier strategies to lose weight and maintain the joy of running. 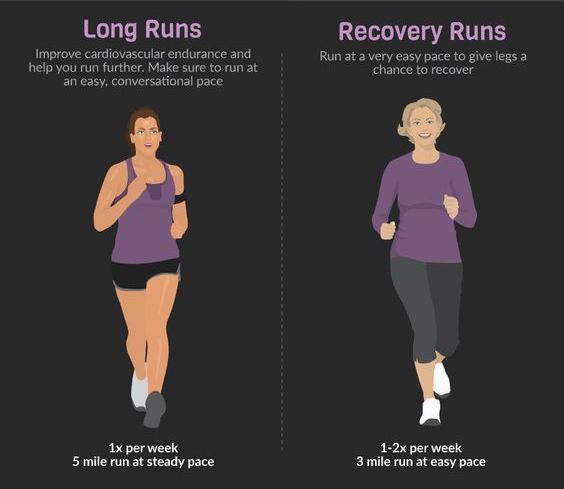 1. Be Sure to Refuel

When you cut carbs or skip meals in an effort to drop pounds, you’re not giving your body what it needs to avoid muscle breakdown. When you run, you use the glycogen in your muscles. So after a workout, you need 40 to 50 grams of carbohydrates to replenish glycogen stores—that’s two to four servings of fruit or complex carbs such as oatmeal or brown rice. The food isn’t going to your gut, either. “The carbs you eat after a workout are used by your muscles,” Rogan says, “not stored as fat.” You’ll want to also supplement that fuel with a little protein for muscle recovery. And if you’re trying to lose weight, don’t double-dip your recovery meals, says Leslie Bonci, R.D.N. “If you finish your run just before dinner, skip the snack.”

2. Don’t Cut Too Many Calories

Let’s say your body needs 2,000 calories to maintain your weight but needs 2,500 when you’re logging extra miles. If you’re eating less than that and your weight drops below a certain point, your metabolism slows down to compensate for the lack of fuel, which means you enter “starvation mode.” Your body holds on to everything it can, making it nearly impossible to maintain weight loss.

Instead of slashing calories, aim for a smaller reduction of 250 calories a day, says Bonci. That should result in a loss of half to three-quarters of a pound per week, which won’t flip the starvation switch, even during training. “It will also ensure you’re taking in enough fuel to avoid tapping into your muscles for energy,” she says.

And to boost your calorie burn with exercise, add 20 to 30 minutes of strength training three times a week. Lean muscle burns about five calories per pound while the body is at rest—meaning yes, you can be burning calories while doing nothing. Fat tissue burns only half of that. Or incorporate sprints into your workout. A study from the University of Western Ontario found that people who added four to six 30-second sprints to their runs lost two times more body fat than those who only ran a slow, steady pace.

People trying to lose weight often get sucked into the latest trends, such as calorie-free sweeteners, fat-free foods, and gluten-free diets. But for long-term health and success, it’s all about real food and portion control. “The closer to the original source of food, the better,” says Rogan. For example, your muscles can’t use fake sugars for fuel, so if you eat a bar made with erythritol or sucralose before a run, you’ll fatigue faster because your muscles won’t have the carbs they need to perform. The smarter move: Limit sugar intake and use natural sources like honey or agave.

That also means if you’re reaching for skim milk over whole, or reduced-fat PB2 over peanut butter, think again. Not only has the eating-fat-makes-you-fat mentality been disproven, but a whole-milk yogurt or a salad with full-fat dressing will keep you feeling fuller for longer. Plus, fat helps your body absorb more vitamins and antioxidants. Just be sure to—again—limit your intake. “Everything in moderation” advice is so commonly given by experts for a reason. 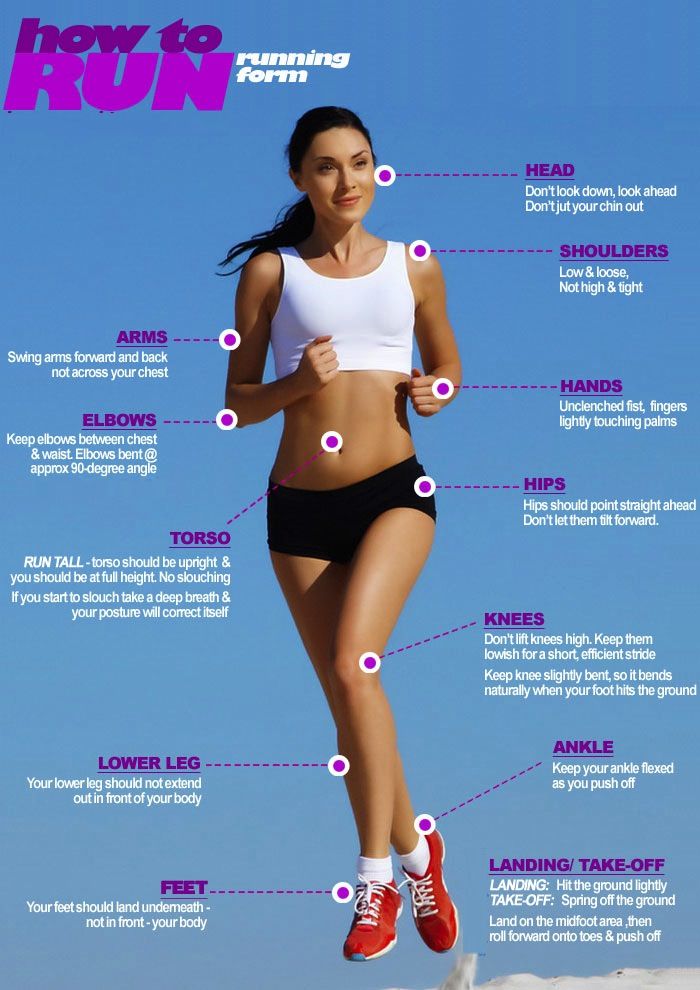 And that gluten-free craze? Unless you have Celiac disease or a true allergy to gluten, you don’t need to cut gluten out of your diet. A recent study in the journal Gastroenterology supports this, finding that those who were never diagnosed with any kind of gluten intolerance didn’t experience any stomach issues after consuming 14 grams of gluten daily for two weeks.

Plus, “removing gluten can backfire on your weight loss and performance efforts,” says Rogan. Many gluten-free packaged foods are loaded with sugar to compensate for the missing ingredients, and eliminating healthy whole grains means you’re not getting important vitamins, minerals, and nutrients needed for muscle function and recovery.

4. Never Lose the Joy of Running

Sure, you can diligently log your calories in an app, try to run on an empty stomach, and force yourself to eat cacao nibs when you actually want chocolate, but you may end up hangry and eating chocolate anyway. “Dieting is about deprivation. Telling yourself, ‘I can’t eat this,’ over and over again sucks,” says Rebecca Scritchfield, R.D. It also doesn’t work long term: Everyone has a weight set point—a range of 10 to 15 pounds that your body settles into. Once you dip below that range, your brain starts to protect you against further weight loss by cranking out hunger-inducing hormones. “In a war of brain chemistry against willpower, your brain will always win,” says Scritchfield.

Instead, she urges runners to ditch the thou-shall-not-eat lists and run for other benefits, such as improved sleep and increased energy. Eating and sleeping well and exercising can contribute to weight loss on their own, too.

Finally, “It doesn’t matter your size—you’re a runner just by getting out there and running,” Scritchfield says. “Your weight has nothing to do with it.” 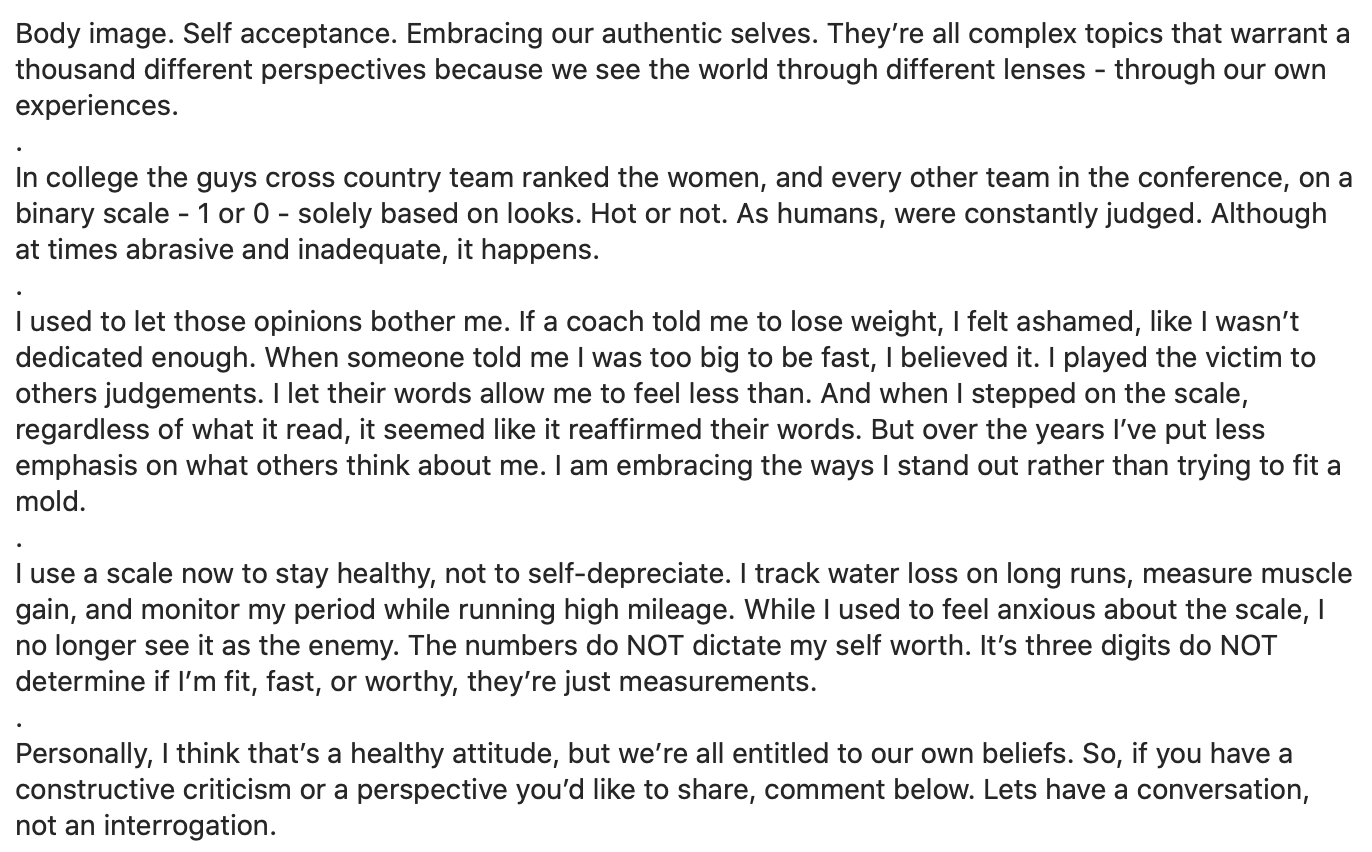 Need more proof? After a three-year hiatus, Kieffer returned to competition. She packed her plate with nutritious food and listened to her body’s hunger signals. She gained six pounds, her tibia healed, and last year she placed seventh overall at the 2018 New York City Marathon with her fastest time ever 2:28:12.

“If I just eat healthy foods when I’m hungry, I seem to do much, much better,” she says. “And I’ve rediscovered the happiness of running.”