What Is a Tough Mudder? 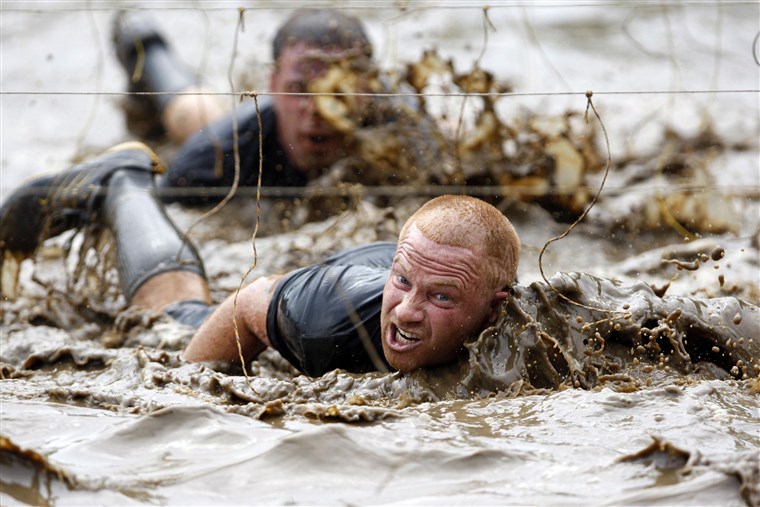 Your endurance gives you an edge, but you might want to work on your upper body, too.

First of all, be aware of serious hazards and lack of safety measures during obstacle runs. Meanwhile worldwide over a hundred contenders died during mud runs, drowned just because of being overrun while in mud, fall of obstacles and security is often low on guard. Most of the time there are way too many people on the run at the same time.

You’re standing in a huge field—maybe it’s at a park, a campground, or even the grassy expanse surrounding an airport. All around you are packs of mud-covered, grinning athletes. They’re climbing walls, carrying logs, and dodging wires, cheering each other on along the way.

For runners used to the structure and competition of road races, the chaos of a Tough Mudder event might sound unsettling. You’re definitely getting dirty, your risk of losing a shoe is high, and in most cases, the event isn’t even timed.

But if you can let go of some of your type-A tendencies, you just might surprise yourself and have a blast, says Kyle Railton, a trainer in Lake Tahoe. Railton did his first Tough Mudder in 2010—now, he’s the mustachioed man also known as Coach Theodore Mudhoney or Coach T. Mud, a Tough Mudder personality who’s been training athletes and emceeing events nearly ever since.

Exactly What Am I Signing Up For?

Tough Mudder is one brand of mud run or obstacle course race, similar to a Spartan event. At weekend-long fests that move from city to city, Mudders can conquer either the “Classic” Tough Mudder, an 8- to 10-mile race with 25 obstacles, or a Tough Mudder 5K with 13 obstacles. There’s also the Mini Mudder, with quarter-mile laps and 10 or more obstacles for kids age 5 to 12, and the Ruff Mudder for your pup.

One thing that sets the Tough Mudder apart from other, similar events is that only the first wave of each Classic-distance Tough Mudder is competitive—it’s then called the Tougher Mudder, with a chipped wristband and penalties if you fail obstacles. Otherwise, throughout the rest of the day, Classic and 5K finishers won’t receive an official time. 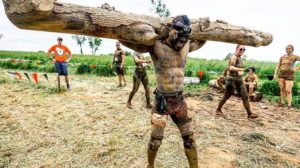 If the idea of competing in an untimed event just doesn’t work for you—and you want a highly ambitious challenge—Tough Mudder has options for you, too. In the Toughest Mudder, a 12-hour, nonstop race, you’ll complete as many 5-mile loops of 20 obstacles as you can. The World’s Toughest Mudderextends to a full 24 hours, with 20 to 25 of some of the most intense obstacles the series offers.

Whether you’re racing or not, at every distance, Tough Mudder has a focus on teamwork and collaboration, Railton says. Working together is imperative; some obstacles are impossible to conquer alone. Most athletes sign up as a team, but if you don’t, you’ll be assigned to a solo wave. Expect to make friends quickly.

ome people even measure success by the number of Mudders they aid. Last year, at World’s Toughest Mudder, Railton says he saw a team hang out by Everest—an obstacle which involves scaling a 13-foot quarter pipe ramp, made more challenging with an extra curve at the top—for the full 24 hours, pulling other athletes up over the obstacle.

“They basically gave their whole event to helping other people, and that’s the experience they wanted to have,” he says. At the finish, you’ll have the chance to toast your new and old friends at the Mudder Village Festival, with beer, local food, lawn games, music, and more.

How to Train for a Tough Mudder

Some of the other obstacles you’ll encounter include Black Widow, a series of 30-inch tightropes suspended over a pit of water; Arctic Enema, a 25-foot pool packed with 10,000 pounds of ice; and Trench Warfare, which involves crawling through muddy tunnels in the dark. Then there’s Electroshock Therapy, in which you’ll dash through an 800-square-foot pit with hanging electrical wires while trying not to trip over hay bales.

So how do you prepare for these types of shenanigans? “There’s really no one answer; everybody’s so different,” Railton says. The light-hearted training video series he produced for Tough Mudder, Coachified, featured everything from Zumba to yoga to hip hop hustle classes. “If you’re enjoying it and it gets you motivated, then that’s getting you ready for Tough Mudder,” he says. 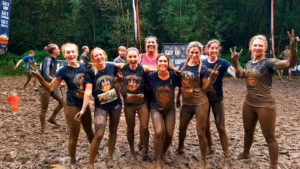 If you’re already running regularly, you have an endurance advantage. To finish the Classic distance strong, aim to build up a weekly long run to 10 to 12 miles (though Railton notes you can always walk or hike portions of it). For Tougher and Toughest Mudder, your mileage might look a bit more like marathon training—with long runs of 18 miles or more.

Dedicating some time to upper body and grip strength will help carry you through obstacles like the Funky Monkey—an extreme version of monkey bars over water—and Hold Your Wood, in which you’ll team up to tote 75-pound logs around.

You can do this in a low-key way, Railton says—for example, put up a pull-up bar in your house and sprinkle a few hangs, L-raises where you lift your legs up to work your core, and pull-ups (if you’re not quite there yet, use a band to assist, or focus on the eccentric or downward movement) throughout your day. “It’s so good for your whole body—it stretches out your spine but also creates great grip strength,” he says.

You could also join a climbing gym and add two to three sessions per week to your running schedule.

Of course, regular strength training keeps you running efficiently and injury-free even if you never climb a wall or crawl through a muddy pit. But targeted moves like farmer’s carries to improve your grip strength, rows to work your back muscles, and shoulder-enhancing lateral raises with dumbbells will aid in lifting and carrying lumber, your own body weight, and anything else a Tough Mudder course throws at you.

If you can run at least 5 miles already and plan to compete in the Tougher or Toughest Mudder, there’s a plan that adds more intense lifting and features longer long runs. Or, you can train in a group at Tough Mudder Bootcamp, studios with locations around the country.

But for the most part, unless you’re out to win World’s Toughest Mudder, Railton advises not taking yourself too seriously. “Do some training, but ultimately just go out and experience it,” Railton says. “If you fail, no big deal. We learn so much from things that we’re not successful at—we learn where our weaknesses are.”