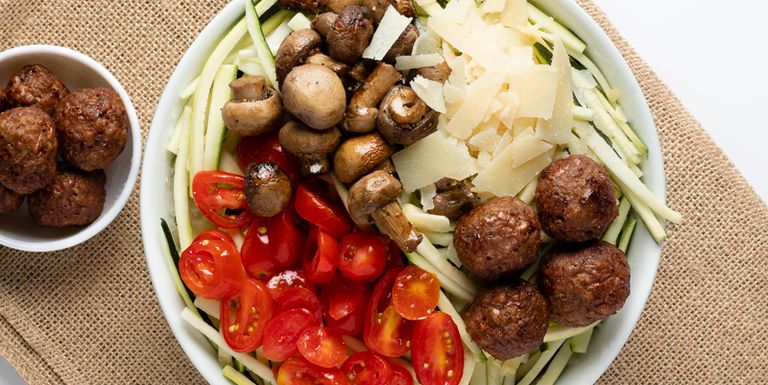 Fast-casual chain Just Salad ditched their meatballs for Beyond Beef. We tapped an R.D. to see how it stacks up nutritionally.

It seems everywhere you turn, restaurants are making plant-based additions to their menus—and they are touting them for both health and sustainability reasons. Within the last six months, chains from Burger King to KFC are trying to incorporate the trend into your diet.

Just Salad, a fast-causal chain feature salads, bowls, and wraps (in New York City, Chicago, Philadelphia, Florida, and North Carolina), is the latest to join the plant-based party. On September 12, Just Salad announced that they are partnering with Beyond Meat to bring Beyond Beef Meatballs to their menu. The meatless protein will replace grilled steak, eliminating all beef from the Just Salad menu and furthering their sustainability efforts, according to a press release.

“The future of food is plant-based,” Janani Lee, chief sustainability officer at Just Salad, said in a press release. “We’re thrilled to offer our guests an alternative to beef that’s just as delicious yet significantly more eco-friendly.” 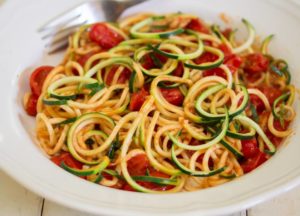 The Beyond Beef Meatballs will become a staple in the chain’s Keto Zoodle Bowl—yep, that’s referring to noodles made of spiralized zucchini, instead of pasta noodles—and can also be purchased as a side.

But how do zoodles and meatless meatballs stack up to regular old spaghetti and meatballs? And what does that mean for runners? We tapped nutritionist Kelly Jones, M.S., R.D., founder of Kelly Jones Nutrition, to find out.

What are meatless meatballs, and how does they stack up nutritionally?

The meatballs, made of Beyond Beef (plant-based ingredients, such as pea, bean, and rice protein) and smoked paprika, cayenne pepper, salt, pepper, and olive oil, provide a comparable taste and texture to regular beef meatballs, along with similar amounts of protein and even a little more iron (though iron from plants is not as easily absorbed as it is from animal products, says Jones).

Here’s how the new Beyond Beef meatball stack up against the old grilled steak offering, according to nutritional information for each per. 3.1 ounce serving provided by Just Salad:

Are zoodles and meatless meatballs any healthier than spaghetti and regular meatballs?

There are clear pros and cons of each when comparing a meal of Beyond Beef meatless meatballs and zoodles against beef meatballs and pasta, Jones says.

“With runners in mind, zoodles alone aren’t an adequate meal due to the low total energy and carbohydrate content.” Carbs, of course, are vital for runners because they are the body’s preferred source of fuel for exercise.

For instance, look at the nutritional breakdown for 100 grams of regular old pastaversus zoodles, according to the U.S. Department of Agriculture (USDA):

Runners need more than just carbs, of course—protein is vital too, as are micronutrients like vitamins and minerals. While any kind of spaghetti (whole wheat, white, or gluten-free) will provide carbs, the addition of meatballs give you a good source of protein, as well as iron and potassium.

But a meal of just spaghetti and meatballs isn’t a full meal on its own, either—you’re lacking a vegetable, which is vital for antioxidants and fiber. Zoodles and meatless meatballs have the nutritional edge there, but adding a veggie to your meal, such as a spinach salad, would make up for it. 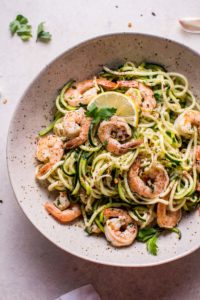 Should you sub spaghetti and meatballs for zoodles and meatless meatballs?

If you’re looking solely at it through a nutrition standpoint, the answer lies in favor of the real deal.

Runner’s bodies need adequate energy to fuel muscles during workouts and fuel recovery, too, Jones explains. Since the real deal offers a supply of carbs, essential for helping you power through your workout or race, reaching for pasta and meatballs would help you fuel a hard workout better than swapping for the full-veggie meal.

But, it also depends on the rest of the meal.

“While zoodles are a great way to fit in a serving of vegetables, the nutrients in veggies won’t get very far in helping your body if you aren’t also eating enough energy,” Jones says. ”If you want to add a couple of whole grain rolls or bread to the side, that’s a different story, and the Beyond Beef meatballs and zoodles would become a very balanced meal.”

“I’m finding many people, especially athletes like runners and cyclists who spend a lot of time outdoors, are curbing meat intake due to its reported impact on the environment,” Jones says.

If that’s the case, you can feel free to swap in a meal of zoodles and meatless meatballs to lower your environmental footprint—just make sure you are bolstering it nutritionally to be as balanced as it could be: That means adding a whole wheat roll or sweet potato to your bowl.

Adding some carbs to your zoodle bowl is a great way to incorporate more plant-based foods into your diet. It’s a win-win: You’ll get the carbs runners need, while incorporating the benefits of a plant-based diet, which include lower risk of chronic inflammation as well as a reduction in recovery time.