Meet the Icycycle, a Bike With Saws for Tires 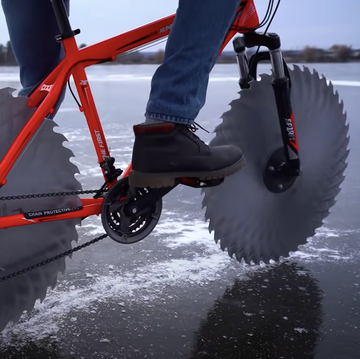 In an impressive feat of terrifying and awe-inspiring engineering, YouTube channel The Q has figured out how to make cycling on ice possible—and insanely dangerous.

The Q created what it calls the “icycycle,”—although we think “diecycle” would also be fitting—and it looks like something we’d expect to see in a horror film: a modified mountain bike that’s been turned into a functional bicycle with circular saws for wheels.

The Q outlines its step-by-step process in the video and shows how the original bike was deconstructed to replace the tires with saws. After removing the tires from the bike frame, the disc brakes were taken off, and the tire was deflated and separated from the rim. Then, the spokes and hub were removed from the rim, and hub deconstruction began.

The rubber tire gets separated from the rim. Next, the hub and spokes will get removed.
YOUTUBE / THE Q

The Q then gets to work building up the saw blade tires; after adding disc brakes and reaffixing the saw blades to the frame, the bike is ready for a spin. Right away, though, there’s a problem: the saw blades are, well, saw blades, and they’re too sharp for the ice. Immediately, the rear blade made quick work of slicing through the ice.

So, what do you do when your razor sharp “wheels” offer no traction? DIY some, of course.

Using small metal plates soldered on to the teeth of each saw blade, The Q managed to create tires that easily roll across snow and ice without cutting and sinking into it. This is the wildest—and most literal—take on shredding the gnar we’ve ever seen.

This effort isn’t the first time The Q goes all out on a bike modification; past projects include a ride with running shoes for tires and a walking bicycle.

While it’s probably not the safest to swap your bike tires for circular saw blades, there are a couple of DIY upgrades you can give your ride to spruce it up and keep it ride ready all year round.

1. Replace bar tape. Doing so twice a year will help prevent issues, like oxidation, that could prove dangerous while you’re in the saddle.

2. Regularly wash and clean your bike. This is especially important in between seasons like winter and spring when salt and mud can do a number on your gears, paint, and affect the performance of your bike.

3. Lube your chain. Treating your chain to some lube will keep your bike pedaling smoothly and help you avoid disasters like snapped chains.